2. Open education and other open movements

There are movements towards openness in education, in research, in public services, in heritage organisations such as museums, and in creative fields such as photography and music. These different movements support each other: an educator creating slides can draw on freely available photographs from archives, or figures from open-access research papers. Hence it is worth taking a quick overview of five kinds of “open” and the links between them.

All the open definitions centre on the rights of users: the right to access and use something, adapt it, and republish the thing or its adapted versions while appropriately crediting its original authors. Often these are phrased as freedoms, and sometimes the adjective “free” is used rather than “open” (as in “Free Software movement” or “Wikipedia, the free encyclopedia”) but the ambiguity of the word “free” can be confusing. This chapter will use “open”.

The Cape Town Open Education Declaration (2007) asks all educators to release their resources openly, arguing that this “will help teachers excel in their work and provide new opportunities for visibility and global impact. They will accelerate innovation in teaching. They will give more control over learning to the learners themselves.”

“Open Education” encompasses more than just whether resources for learning are openly and freely accessible. The Cape Town definition includes innovative approaches to assessment and collaborative learning. The term Open Educational Practices (OEPs) captures this idea that open education is not just about resources, but about the context and practice of learning.

The open education movement has evolved in multiple, even contradictory ways over the past decade. One outcome of this evolution is a large amount of educational material freely accessible online, often driven by charities and other funding bodies. We look at some of this in detail in the next chapter.

Another outcome is the growth of online courses open to public enrolment. The term Massive Open Online Course (MOOC) has become fashionable, although it is almost always a misnomer.[1]

Some courses using the MOOC label are massive in the sense of attempting to build a network of interactions between learners, encouraging them to respond to the course material, and each other, in varying forms across multiple online platforms. A different kind of MOOC has become more common: a kind of Virtual Learning Environment with public enrolment, connecting a large number of people to video lectures, quizzes or worksheets, and discussion forums. Often these are supported by a commercial start-up company in partnership with a university. So there are MOOCs that involve some abdication of status by the course leader in the service of a distinctively online, distributed context for learning,[2] while others bring a more didactic form of teaching to a mass audience, building on and reinforcing the star status of the best-known lecturers.

While they were initially promoted as a challenge to the fundamental business model of universities, enthusiasm (and fear) for MOOCs has waned and they are now more likely to be seen as a marketing option; not sustainable in themselves, but viable as a way to publicise conventional courses and institutions.[3] One way the MOOC label is misleading is that MOOCs do not usually lead to substantial sharing of resources on the open internet, although they offer learning experiences rather than mere access to resources.

Widely different positions on a spectrum of open education are illustrated by visiting MIT OpenCourseWare (an open archive of educational resources) and FutureLearn (a UK-based MOOC platform). OpenCourseWare makes complete sets of course material freely accessible. Its long-term nature means that a large amount of material is available, including a lot that is out of date. By contrast, FutureLearn is very time-specific and frequently changing. At the time of writing it offers several opportunities to sign up for economics-related courses running in the near future, but no chance to look over what staff or learners produced in previous courses.

The people best-placed to benefit from a mass online course are usually those with the subject background and intellectual discipline gained from already having a degree. So while MOOCs were initially promoted as democratising the world of education and promoting equality, their greatest benefits have gone to those who are already well provided-for.[4]

Alongside the changes within higher education there have been other developments bringing education to the masses, less remarked-upon because they are happening in plain sight. Mainstream online communities are increasingly being used for learning activities. YouTube videos about mathematical and scientific subjects get a large audience: it is not hard to find videos on economic topics that have half a million views. Communities where people share and remix images, such as Flickr and Wikimedia, have created tens of millions of images with a educational purpose. The barrier between formal learning “in academia” and informal learning has eroded as more university courses make use of these platforms.

Comment and discussion features on sites like YouTube can bring out the most ill-informed opinions but, when the will is there, online communities can support a conversation that is respectful and substantive while still involving large numbers of people. The discussion site Reddit has Ask Me Anything (AMA) events where academic experts answer questions that have been voted on by the community. Economists taking this opportunity include macroeconomist Brad DeLong, Marxist Richard D Wolff and libertarian Bryan Caplan. Online discussions can also bring campus-based students into contact with external experts such as entrepreneurs.

Blogging is another way an academic expert can build up a set of resources through an ongoing dialogue; posting their own observations or commentary on other sources and generating responses from the public.

The open access movement presses for papers and other outputs of research to be available to the public without restriction. In the language of the Budapest Open Access Declaration (2002), this level of access will “accelerate research, enrich education, share the learning of the rich with the poor and the poor with the rich, [and] make this literature as useful as it can be”.

On the recommendation of the UK Government’s 2012 Finch Report, Research Councils UK and the Higher Education Funding Council for England have taken up policies that encourage publicly-funded research to be published openly under licences that permit adaptation and reuse.[5]

One link between open access and open education is that if more research is freely available online, students and independent learners can consult it through home and mobile networks as easily as on-campus. This is one reason why student voices are prominent among those calling for open access, such as the Right to Research Coalition.

Data that are published are not necessarily open. A data table in a PDF document is not directly linkable and it is not guaranteed that applications will be able to extract it and process it. Even data that are easily accessible can still have legal restrictions. Open data is defined by having no technical or legal restrictions on its reuse. The Panton Principles summarise the Open Data movement’s goal that “data related to published science should be explicitly placed in the public domain.” 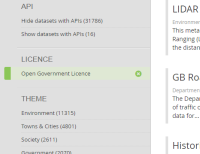 The Data.gov portal has a search option for data that have minimal
restrictions on reuse.

Open data are increasingly seen as essential infrastructure for business and research, including by the World Bank and by the G8 countries, who have committed to making a lot of their public-sector data openly available. In the UK, these are published on the Data.gov.uk portal.

One open data project that supports education is Wikidata, a sister project of Wikipedia. This human- and machine-readable database makes it possible for programmers to create interactive objects such as maps of economists’ birthplaces.

When software is open source, its underlying code is published, rather than the confidential property of the authors. Users can study what the code is doing, which is useful when the code uses private information (such as a web browser) or when it is crucial to research. The designation “free software” implies that users can also alter and redistribute the code. Open source software is ubiquitous: the Internet would not function without it, nor would Android phones or Apple devices. Services like Github enable public sharing of code along with version-tracking and collaboration.

Open source and open data connect to the reliability of research. It is one thing to read that an analysis of a data set gives a particular result; another to have access to the data and code needed to replicate the analysis. Students could even conduct a replication as an assignment and share their results, contributing to open education. That is the idea behind ReplicationWiki, a project hosted by the University of Göttingen to encourage replications of econometric research. ReplicationWiki includes a database of published studies that have not been replicated, and allows users to record successful or failed replications as well as difficulties getting hold of the raw data.

Any kind of creative work, including images, music, or video, can be freely reusable or have all rights reserved. By default, copying requires the permission of the copyright owner. Since Adam Smith’s and Thomas Malthus’ works are out of copyright, there are editions of Wealth of Nations or Essay on the Principle of Population that you can distribute freely without permission, even an altered version with annotations. Just grab the text from the History of Economic Thought archive or Wikisource.

Copyright applies automatically to an original creative work, and normally elapses seventy years after the creator’s death (though there are several exceptions, such as a shorter term for and broadcasts and sound recordings).[6] If default copyright protections are too restrictive — for example if something is best used by being shared widely — the creators or owners can use an open licence to encourage reuse. In the UK, new government publications (for example from the Treasury) by default have the permissive Open Government Licence. No permission is needed to adapt them for educational use or other purposes, so long as you follow the terms of that licence, which include citing the source.

Open culture supports open education in that, if you are looking to create freely reusable educational materials, the source images or other content need to be freely reusable. Even if your own materials are not open, it’s an advantage if you can use a variety of images and other source materials, knowing there is no requirement to pay royalties or obtain permission from the owner. Later on in this handbook chapter we will look at finding freely reusable images, video, and audio.

‹ 1. Why open? up 3. Finding and sharing open resources for economics ›