We are delighted to announce that as of September 2014, the Economic Review's Editorial Board reflects a new partnership between the University of Southampton Economics Department and the Economics Network.

The Economic Review was launched in 1983, and since then has been edited by economists at Southampton. It is a magazine designed for A-level Economics students, intended to present a topical and lively coverage of economic policy and issues, expressed in language that will be understood by students with relatively little existing knowledge of economics or its jargon. As such, the magazine is a blend of some articles that address key areas of the A-level specification with others that seek to capture the interest of students by applying economic thinking to everyday life and encouraging them to think beyond the specification.

In each issue of the magazine, there are feature articles written by a range of academic colleagues, together with regular columns provided by the IFS and by members of the Editorial Board covering topics that will be of particular interest to A-level Economics students. The magazine is available only on subscription, and is taken by more than a thousand schools and colleges in the UK. 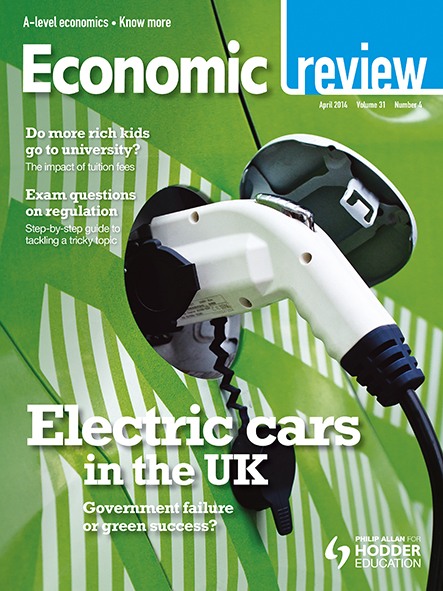 For students who start their A-level study in 2015 major reforms to the content and assessment will go live. This affects Economics and most other A-level subjects, although some will not see change until 2016. The main change will be in terms of assessment, with the A-level examination being concentrated at the end of the second year of study, and covering both years of the course.

More important for the Economic Review are the changes to the content of the specification. Full details will not be made public until later in the year, but what is clear is that there will be a greater emphasis on the use of quantitative skills as part of the economics curriculum, and more content relating to financial and “real world” economics. These changes offer an excellent opportunity for the Economic Review to offer support materials in these key areas at a time when teachers may be looking for assistance in updating their own skills and knowledge. The changes to the editorial arrangements thus come at a particularly exciting time for the magazine.

From the Network’s perspective, this represents an opportunity to raise the profile of the Network amongst A-level teachers and students – and it has been found that more than 50% of students who take the magazine proceed to study Economics at university level. It is also an opportunity to encourage a wider range of colleagues to be aware of the chance to publish in the Review. It won’t count for the next REF, but is an opportunity to reach a wide audience of readers eager to learn what economics can do for them!