4. Releasing your own resources

The open approach can be summed up in three points:

Every reader is a potential remixer, so make your intentions clear when putting anything online, from a photograph to an online textbook. Unless the licence is specified by your work contract, you have some freedom of choice in how you license your work. Do you want the reader to be able to make their own copies, update it, combine it with other materials, or do you forbid use without your advance permission? If you want reserve all rights, say so. 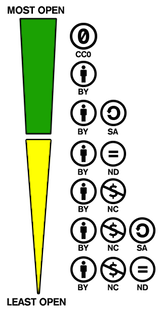 Use a standard licence. Resist the temptation to put “for educational use only” or your own wording. These are not legally pinned-down. The Creative Commons licences have been worked on by legal experts in the UK and internationally, in consultation with educators and other users. Sharing ought to be straightforward for creators and users, and any ambiguity works against this.

There are seven variations of Creative Commons, with different combinations of clauses such as Attribution required (BY), Share-Alike (SA), and Non-Commercial (NC). With the default “all rights reserved”, this gives eight total choices.[1] Arguably this is already too complicated: more options only make it more confusing.

When uploading media to Flickr, YouTube, or Wikimedia Commons, you choose a licence as part of the upload process. On other platforms, selecting a licence just takes a little more thought. 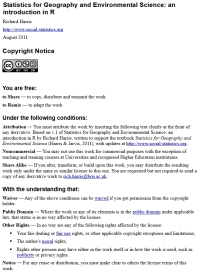 The official page for each Creative Commons licence explains how to attach that licence to your work. It can be as simple as including a single sentence, ideally with a web link. For extra clarity, and for resources that might be used offline, repeat the licence text.

Geographer Rich Harris of the University of Bristol has released his “Statistics for Geography and Environmental Science: an introduction in R” as a set of open resources. The first page of the Word document is a lay summary of the material’s Attribution-NonCommercial ShareAlike licence, copied from the Creative Commons site.

A couple of considerations to be aware of:

Universities are increasingly wording employment contracts so that they automatically have permission from lecturers to share footage of performances done in work time. When this is not the case, you may have to declare in writing that you are happy for recordings of your performance to be public.

If you are sharing a video of someone else, such as a guest lecturer or conference speaker, you need their (ideally written) permission, including a mention of performer's rights as well as rights in their presentation materials.[2]

4.2 Be bold and choose a liberal licence

It is almost impossible to anticipate the uses people will find for your work, and that this is a good thing. Putting a “No Derivatives” clause implies that the work is the best it could ever be for its purpose; that no tweaks anyone could make would improve it. In the case of educational material, it assumes that no one would have a need to update key facts. “No Derivatives” might be appropriate for something like a legal contract where even a small change of wording might render it useless, but not an educational resource which will need to be updated to remain useful.

How can we prevent exploitation of our work for commercial gain, while supporting those who use it for legitimate educational purposes? Creative Commons licences can have a “Non-commercial” clause which may seem an obvious solution. However, the clause has been notoriously hard to define in practice. When universities charge tuition fees and much research is published in subscription journals, education and research could be argued to be commercial activities. Educational use of material might involve posting it on YouTube or on a public blog, which would involve use of a commercial tool.

As Wild and Wilson (2013) write: “When choosing a CC BY-NC licence you might think that you only prevent use within the for-profit sector. This is not entirely true: you may actually prevent use within the public and non-profit sectors as well.”[3] Some of the most high-profile platforms for educational material actually forbid non-commercial clauses, for example Wikimedia Commons.

The Non-Commercial clause may not be the ideal way to prevent exploitation, but there are alternatives. One way is to release material in a public showcase: charging for something that people can get easily at no charge is a terrible business model. The ShareAlike clause, requiring any altered versions to have the same licence as the original, is a further layer of protection. It prevents anyone from making a derivative version of your work, and then placing that version under restrictive copyright.

The above examples assume that people obey copyright law, but outright plagiarism (ignoring copyright law) is a possibility. However, this is a risk that comes with putting material online in any form, whether openly licenced or not.

4.3 Give credit where credit is due

When you download and use Creative Commons-licensed materials you are implicitly accepting a legal contract, so take seriously the requirements of the licence. You are usually required to attribute the author in the manner they specify, so for example you might be required to link to their web site. Often you are required to specify the licence, and it is a good idea to do that anyway.

Again, since every reader is potentially a remixer, somebody who sees an image in your presentation might want to use the same image in their own works. This is another reason to give an explicit path to that source. So credit the author, the licence, and the site where you found the item, like the examples in Section 3, not just “found via Google” or “found on Wikipedia”.

If you use Creative Commons-licensed images in lecture slides, you can credit the source images in the foot of each slide or in a slide at the end.

[1] P2PU have a short online module to explain the different types of CC licence.

‹ 3. Finding and sharing open resources for economics up 5. Conclusion ›
Supported by