4. Teaching a contending perspectives course on economics of the environment

All of the course structures contained in this chapter are of course simply materials from which to draw. Above, one could choose to teach the courses as laid out, or pick elements to include in one’s own introductory or intermediate microeconomics courses. Both of these courses are core to the curriculum, and are ideal if one’s goal is to integrate sustainability into the curriculum. However, if one chose instead to create specialist courses, or if the goal was to allow students to build on earlier core courses, a different model is required. The next two sections discuss two possible options: one is a course on economics of the environment; the second (Section 5) is on economics of/for sustainability.

Many of the concepts in the left-hand column of Box 6 are familiar to most economists, being derived from standard theory. A typical course on environmental economics might look something like the left-hand column. Another variant is to deliver ‘natural resource economics’ in which both renewable and non-renewable resources are considered. Ecological economics is a somewhat younger branch of the discipline. The focus is more on approaching ecological processes than from an economic perspective. Two names are particularly prominent in ecological economics: Herman Daly and Robert Costanza. They demonstrated the immense value of natural systems by attempting a monetary valuation of them, and the total value they derived dwarfed the value of other inputs into economic systems (Costanza et al., 1991). Daly also proposed a steady-state economy in the sense that it operates so as to avoid further ecosystem degradation but rather enables natural systems to recover (Daly, 1991). There is considerable overlap in the subject matter of ecological and environmental economics. The key difference is one of orientation: environmental economics tends to embrace the neo-classical paradigm as an analysis of the economic system and seeks to incorporate environmental assets and services into that behavioural model. The objective is to maximise economic welfare. Ecological economics gives priority to the health of complex interrelated ecological systems and considers how economic behaviour can be modified to that end.

A third alternative is to teach both ‘environmental economics’ and ‘ecological economics’ in debate or, in parallel, i.e. as complementary or contending perspectives. Again, the instructor faces a choice of how to do this. In the course shown below (see Table 2) the contrast between the two views of economics is presented almost immediately.

The course begins by outlining the current world situation. It is hoped that this would stimulate interest. It is important to stress at that point that there are a number of issues to consider. Whilst it is important to bear in mind that there are dissenters to the near-consensual view on anthropogenic climate change, it is unproductive to get stuck on that issue; it is better to move on to questions of biodiversity loss, resource depletion and the like.

After this opening follows the discussion of the two contending (or complementary) perspectives. Again, at this point, the instructor has to choose whether to see the perspectives as arguing over who is correct (contending) or as both providing insights that fit with those of the other (complementary). This choice affects the entire delivery of the course and is particularly acute in its assessment. Students can be asked to consider a problem from both perspectives and consider which one is better, how to use both, or even be invited to supersede each in a novel combination. Whichever of these routes is taken, there is a danger of confusing students; however, these dangers can be reduced if the contrast is introduced early in the process, and if it is reinforced often, particularly in assessment. Thereafter, the course is a series of topics on which each perspective has a bearing to differing degrees.

Using multiple perspectives can be challenging to students. Guide them carefully, but do not push them through the contrasts.

It is true that much of the early material is from natural science and it would be unreasonable to expect economics instructors to be au fait with many of them. For example, most would not have a command of the laws of thermodynamics; however, some rudimentary knowledge of them would be required. The crucial point to get across is of entropy and of how it is necessary to have systems that are open. Similarly, it requires an ecologist to understand fully the nature of ecosystem services; however, the main point of this discussion is to make clear the roles of carbon sinks, etc. and to encourage students to think more broadly about, say, a field than simply its marketable value. Fortunately, standard texts in ecological economics deal with this need by offering definitions of concepts such as damage functions, assimilative capacity and the like.

Many of the other points have already been discussed, and draw on the material elsewhere in the chapter. On many of these there is considerable debate between environmental and ecological economics. For instance on valuation (see Box 4) while ecological economics acknowledges that conventional valuation methods such as WTP and WTA, hedonic pricing, etc. are useful they are more sceptical about their value. Ecological economists are more likely to argue that vital ecosystem services are not amenable to valuation at all, or at least only with considerable scope for error.

The scope for debate continues throughout the course, finishing off with the highly contentious topic of climate change and the controversial Stern Review (2006). The Review is a very useful pedagogical device because it is possibly the most thorough application of techniques of economics of the environment to questions of sustainability (and certainly the most well-known) so provides an excellent vehicle via which to reflect on the rest of the material in the course. Also, the Review is useful because it has been vigorously opposed from both sides of the debate. For example, Nordhaus (2007) has argued that the discount rate assumed by Stern is too low. Dasgupta (2007) is concerned that Stern’s discount rate does not take into account sufficiently intragenerational equity. Ackerman (2009) criticises the attempts at valuation within the Review. An obvious capstone to this course would be a debate between groups of students on the Stern Review, in which they are expected to draw on relevant concepts from the course.

Growth is the most contentious macro-economic objective for sustainability. Ever since the limits to growth hypothesis was put forward in 1972 (Meadows et al., 1972), economic growth has been seen as the enemy of sustainability by most in the green movement. The hypothesis is easier to support now than it was 35 years ago and makes an ideal platform for discussing sustainability at the national level. An opposing view is centred on the environmental Kuznets curve hypothesis, which suggests that as nations become wealthier a point is reached where environmental damage decreases with further economic growth and increases in wealth (Grossman and Krueger, 1991). There are many critiques of this hypothesis. One of the most telling is that the finite resources of the planet constrain the ability of all nations to reach the level of wealth that represents the point of transition from a direct relationship between income growth and environmental damage to an inverse one. The most damning critiques challenge the empirical evidence for the relationship and show that few damage indicators reveal a turning point across those nations for which data are available. Furthermore, the hypothesis does not appear to apply to carbon emissions (Bradford et al., 2005). 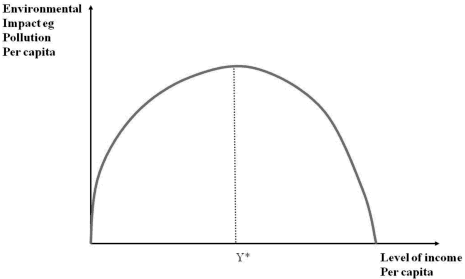 The EKC provides a rich platform for debate. Initially it is appropriate for students to prepare for this by looking at the empirical evidence for the hypothesis. Students should be directed to the results of the original paper by Grossman and Krueger (1995). A recent appraisal of the various critiques that followed over the subsequent 15 years are referred to in Carson (2010). These critiques deal with methodological issues, in terms of data, functional form and analysis. Few of the original pollutants investigated by Grossman and Kruger and shown by them to comply with the hypothesis survive this scrutiny. Students should be able to glean this from the Carson paper and relay their understanding to the class as a whole. However, there are more fundamental issues that students can be guided to in discussion. Even if the EKC held for significant pollutants in one economy, the differing development trajectories of the major global economies are out of phase. Thus at the global level, the rapidly growing BRIC economies and emerging market economies, all at various points on the upward section of the EKC, would more than offset the mature economies which might be at various points on the downward section. Finally, the long lag between the generation of some pollutants and the subsequent ecosystem impact further confuses the picture.