Wikis first appeared in 1994 when Ward Cunningham invented the concept and gave it its name. A wiki is a website whose content any authorised person can modify, without requiring any knowledge of web publishing software. Wikis are widely known and used and have, in the past few years, been more widely adopted in the academic world.

The philosophy of wikis is to be an open collaborative space and to encourage collective intelligence. For these reasons, wikis can be an important tool for group work where students can share their reflections and learning from a lecture/text/assignment, and undertake group assignments by collaborating on shared documents and submitting a final joint report/assignment.

The organisation of group work through a wiki allows for the tracking of each individual member’s contribution to the final assignment, thus greatly eliminating the incentive to free-ride on the other members of the group. Also, being a digital meeting room, students can work at a time of their own choice and do not always have to meet physically in order to work on the common project. As noted on the JISC infoNet website, ‘wikis give an opportunity for users with different types of knowledge, confidence and communication to contribute equally to a joint publication. Collaborators who lack confidence to argue a case in a “live” face-to-face debate can feel more comfortable making the same points in a wiki environment where the pace of discussion is slower and the quality of the thinking is more significant than force of personality. Wikis can be particularly helpful at including people who are shy, or who have hearing or communication difficulties.’[2]

As with blogging, there are many different wiki creating and hosting services available. Wikis can either be created and managed by external, mostly open service providers (e.g. Wikispaces) or internally in the university’s IT systems. The latter tends to be the preferred option of most universities where there may be a greater emphasis on features like access control (and data protection), integration with other internal software, and document management. Most VLEs provide basic tools for the creation and management of wikis but many prefer to house their wikis on a dedicated server and use specialist software that allows for a higher number of functionalities and uses (Confluence, Socialtext, Jive SBS, SamePage, and Traction TeamPage). Figure 14 presents an example of a Confluence Wiki system.

Figure 14: An example of a Confluence wiki system 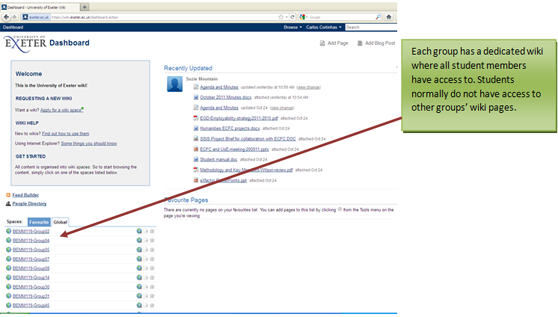 A separate wiki can be created for each group and students’ access can be limited to viewing their own group’s wiki. Inside each group’s wiki, sections for webpages, blogs, labels, attachments, activities and others are available to group members and lecturers for guidance. An example of a group’s wiki page is presented in Figure 15.

Figure 15: Example of a wiki for group work 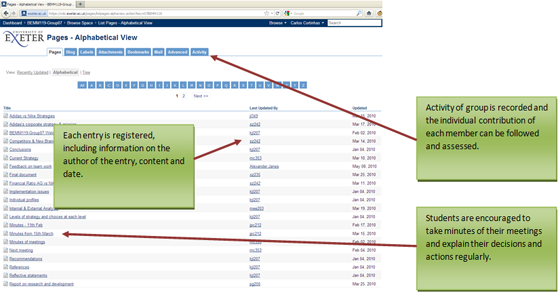 Group members will work together, editing the same comments and adding their input over time to the file containing the final report. As all students work in the same document, only one version of each document exists at any one time. Figure 16 shows an example of a final group report. 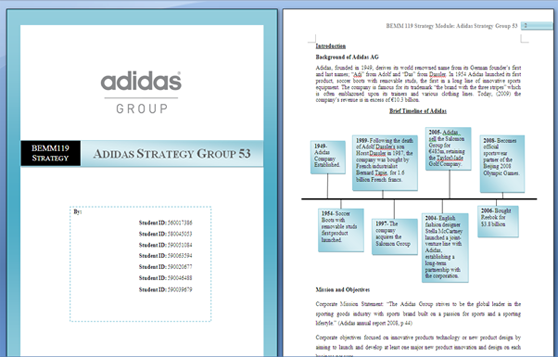 As the wiki management system is integrated in the university’s IT system, the final report can be checked for collusion and plagiarism with the Turnitin software (see section 2.5 above).

Even though the use of wikis is now quite widespread and its proponents are many, a number of challenges also exist. Technical issues can be a major problem and often require a lot of technical assistance. The creation and management of a large number of wikis (groups) requires a large input by the lecturer(s). Monitoring each group’s work and assessing each student’s contribution to the final report is very time consuming despite all the tools available. An alternative is to use a single wiki and then ask groups to create their own pages. As all changes are recorded, it is still easy to determine the individual’s contributions and, by comparing time stamps, to see if students are taking ideas from other groups. Also, wikis often generate competition between members of the team but do not necessarily lead to better work.

[1] For a more detailed discussion on the common problems of group work, see for example Davies (2009).

‹ 2.5 Turnitin (plus GradeMark and PeerMark) up 2.7 Learning logs ›
Supported by