The following report from the Economics Network presents the NSS data from 31 universities for economics and related subjects from 2010 to 2016. The data included are only from universities that have consistently offered all three subjects over this time period. This data selection ensures a reliable picture of the relative progress of economics in comparison to similar subjects.

The graphs show the % of positive responses to the questions in the 'teaching', 'assessment and feedback', 'personal development' and 'overall satisfaction' sections of the survey as these are the most relevant for comparison between subjects. We do have graphs for all questions in the survey, so please contact us if you would like these.

Note: the axes in the graphs below vary.

Satisfaction with the course 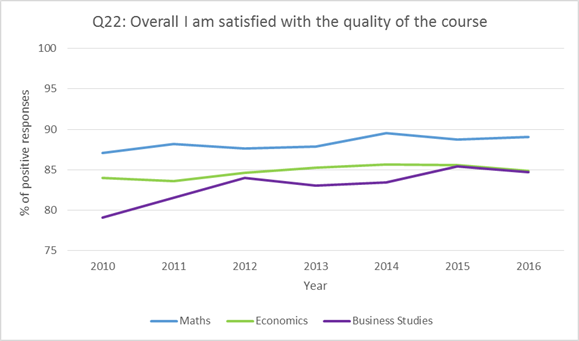 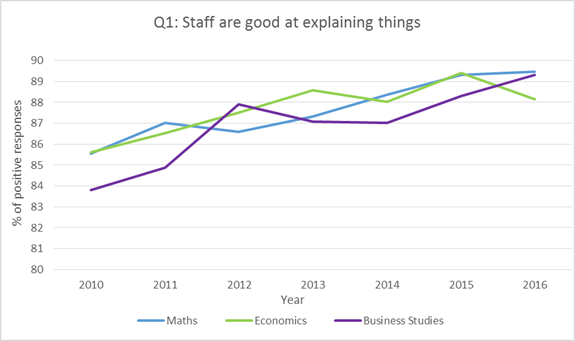 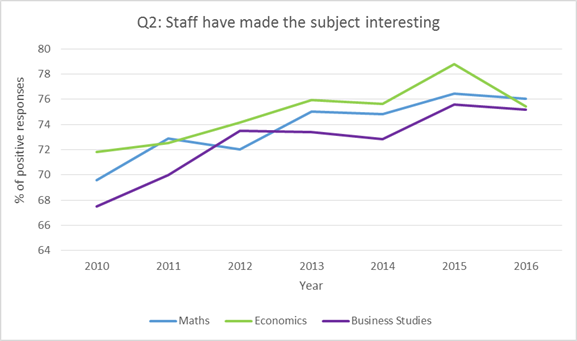 All subjects saw a small decline in positive responses to question 2 in 2016, but in general all three subjects have improved over the last six years. 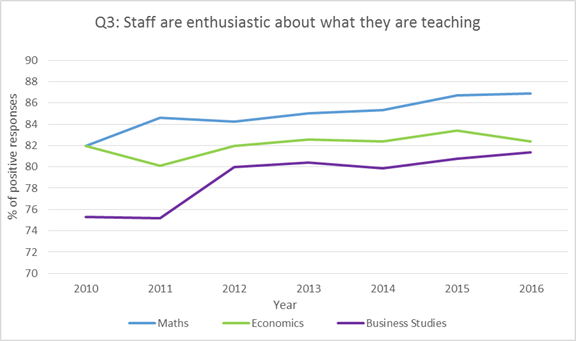 Since 2010, business studies and maths have seen more significant improvements in responses to question 3 than economics. Nevertheless, in 2016 over 82% of respondents reported that staff were enthusiastic about teaching economics. 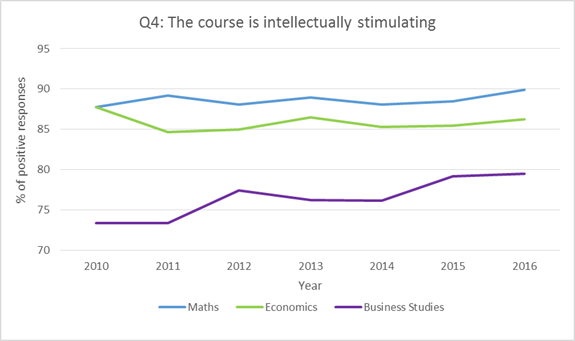 In 2016, 86.3% of respondents for economics answered that their course was intellectually stimulating, compared to 89.9% in maths and 79.5% in business studies. 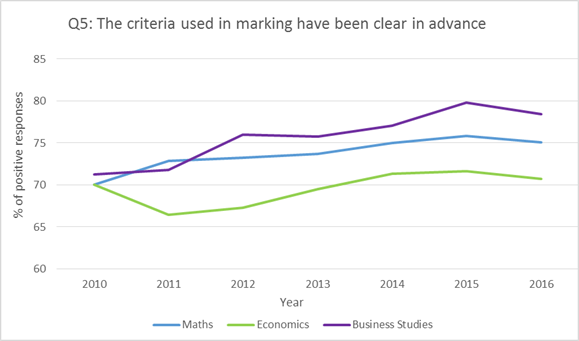 Compared to questions around teaching, the percentage of positive responses to questions relating to assessment and feedback are generally lower. 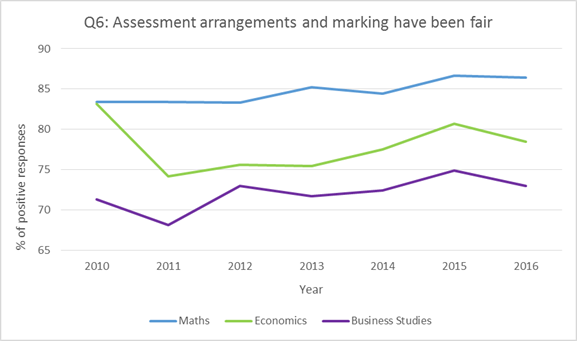 Economics has improved on assessment and marking arrangements over the last few years, with 78.5% of respondents answering positively in 2016, however this has not returned to the peak of 83.1% in 2010. 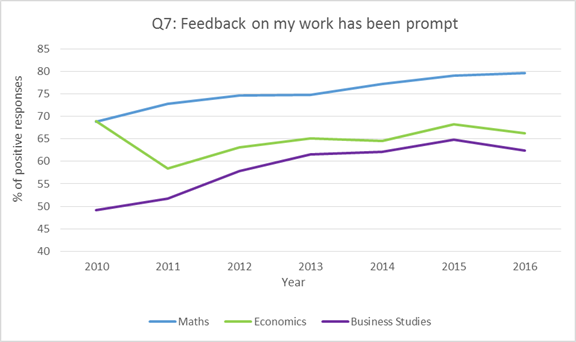 In 2016, 66.3% of economics students who completed the survey felt that feedback on their work had been prompt, compared to 79.6% for maths and 62.5% for business studies. 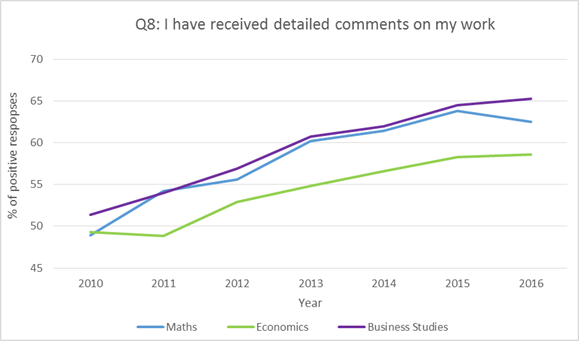 Economics has clearly improved on providing detailed comments on students' work (from 49.3% positive responses in 2010 to 58.6% in 2016), however maths and business studies continue to achieve better results (62.5% and 65.3% respectively). 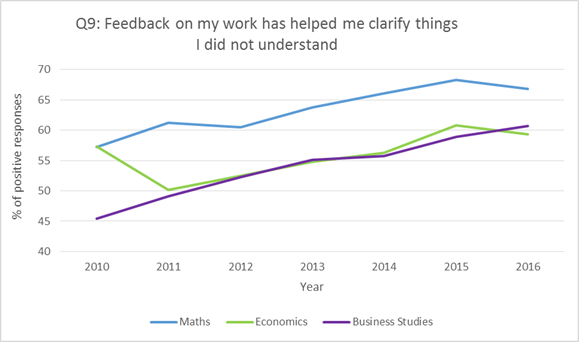 Since 2011, maths has outperformed economics and business studies on offering feedback that clarifies students' understanding. 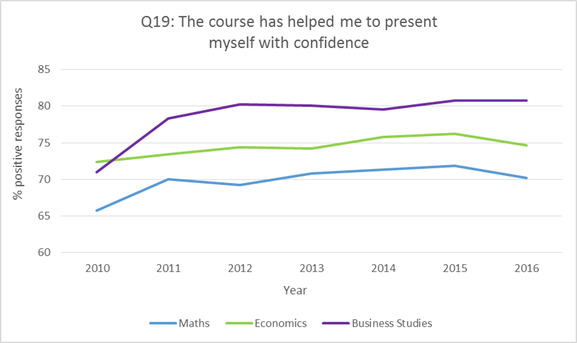 In 2016, 74.7% of economics students in this sample reported that the course helped them to present themselves with confidence, compared to 70.2% for maths students and 85.3% for business studies students. 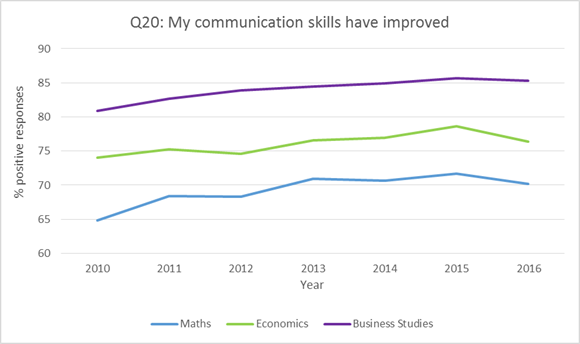 Business studies continues to outperform maths and economics on developing students' communication skills. Economics dipped slightly in 2016, to 76.4% compared to 78.7% in 2015. 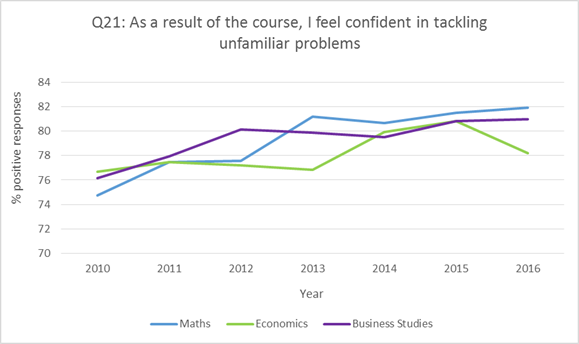 Overall, all three disciplines have improved on helping students to be prepared to tackle unfamiliar problems since 2010. In 2016, 78.2% of economics students responded positively to this question.