Lecture recording allows instructors to capture lectures as a media file that is then released online to students. The technology varies. Sometimes the system films the instructor and their presentation. The advantage of this is that it records a very realistic lecture experience.[1] On the other hand, the disadvantage is that the instructor is kept close to the podium and this may result in less engagement with the students in the room. Nevertheless, the technology continues to advance, for instance using cameras that follow the instructor’s movements in the room.

Other systems, instead, capture only the slides of the presentation given in the lecture, together with the audio recorded using a microphone. While these recordings may tend to feel less personal and interactive, they may give the instructor more flexibility (a wireless microphone also gives more freedom of movement) and induce a more natural teaching experience since instructors do not need to worry about how they look on camera.

Figure 2: list of lecture recordings available for the Business Economics II students at the University of Manchester 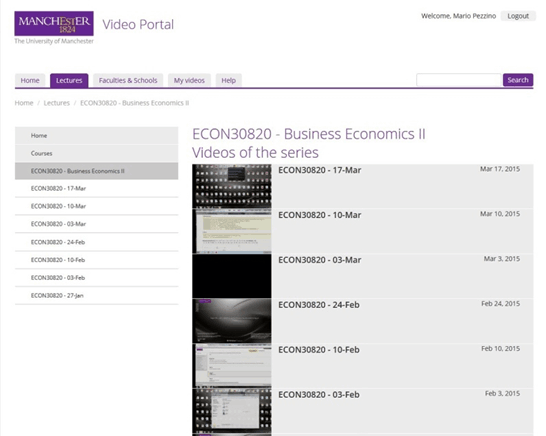 Lecture recordings offer numerous potential advantages. Recordings may provide useful support to those students who have missed a lecture. Also, since videos can be paused, rewound and fast-forwarded, students can revise multiple times particularly challenging aspects of the material covered during lectures. Indeed, recordings can be useful for revision in general before an important piece of assessment.

Do students use and value recordings?

In practice, there are important questions that each instructor should consider when releasing a lecture recording. For example, do students use recordings? When and how? What is students’ willingness to pay for recordings? What are the effects that these media have on students’ performance? These issues have been explored in the literature.

Agarwal and Day (1998) showed that various forms of internet enhancement to teaching (email, discussion boards, etc.) may have a positive effect on students’ performance. Flores and Savage (2007) and Savage (2009) studied economics students’ demand for recordings and the effect of recorded lectures on their performance. Specifically, Flores and Savage (2007) considered a type of recording that films the instructor and requires them to stay close to a podium. The authors used choice experiment data to estimate economics students’ willingness to pay for recorded lecturers compared to instructor movement away from the podium. The analysis showed that groups of students have different willingness to pay for recordings. In particular, those who appreciate recordings were willing to pay an additional $90. The authors, in addition, found a positive correlation between the use of recordings and exam grades.

Savage (2009) studied the effects of the release of recordings on an intermediate microeconomics module and found a positive, but not significant, effect on students’ performance. It is important to notice that Flores and Savage (2007) and Savage (2009) considered rather small sample sizes. A larger sample size was considered in Chen and Lin (2012). They studied the relationship between the use of recorded lectures and exam performance among 312 microeconomics students in Taiwan. They showed that particular groups of students are more inclined to use recordings. In particular, students who tend to skip most classes and male students are more likely to access recorded lectures. In general, most students tend to access the recordings just before exams. The authors showed also the existence of a significant and positive relationship between the use of recorded lectures and grades.

In general, when asked, students tend to report that they appreciate the opportunity to be offered lecture recordings, claiming that they are a valuable support to their learning and revision. Interestingly, students’ claims reported in surveys may not correspond to the actual willingness to pay for a service. Taplin et al. (2011) estimate the willingness to pay of accounting (UG and PG) students for recordings. While students claimed to appreciate the resource, only a small number of them would actually be willing to pay for it. The authors also found out that many students in reality did not access the recordings regularly. What Taplin et al. highlight is the need for a deep understanding of students’ willingness to pay and their use of recordings.

Elliott and Neal (2016) used a revealed preference approach to answer these questions. The authors monitored for two years the frequency of access to recordings, the time of day and the length of viewing for students taking a large year 1 economics module. They identified spikes in access in the days before pieces of assessment were released. They also detected regularities in the use of the lecture recordings. Interestingly, the authors reported a significantly higher use (84% and 95% in each respective year) of the resources than previously reported in the literature.[2] The authors argued that lecture recordings are treated by students as a supplement to lectures rather than a perfect substitute. Finally, they mentioned how lecture recordings may provide invaluable support to students with special learning needs. Indeed, instructors should not forget that such students may welcome the opportunity to pause or go multiple times over a lecture.

Jones and Olczak (2016) studied the effect of lecture recording on the cohort of a large introductory economics module taught in a Business School.[3] They showed that students’ performance in other modules and previous economics experience are the key determinants of performance. Lecture recording, nonetheless, tends to help counteract the lack of previous economics experience of some students.

Sometimes students may be asked to contribute to a lecture. In particular, they may be asked to present in front of the class. In this type of situation lecture recordings may become a powerful tool to improve students’ confidence, communication and presentation skill.[4] Students would be able to watch the recording of their presentation and, accompanied by feedback from the instructor and the rest of the class, can learn and improve their communication skills.

Do instructors use and value recordings?

While evidence appears to point toward a general appreciation by students of the resource and a positive effect on their performance, instructors may sometimes be uncomfortable with lecture recording. In general, their reasons are that recordings may have a significant negative effect on students’ attendance and instructors’ performance may be affected by the awareness that they are being recorded. Regarding the first issue, evidence is inconclusive about whether release of recordings affects lecture attendance.[5] In addition, we would invite instructors to consider whether lecture attendance should be valued per se. In other words, is a reduction in lecture attendance necessarily a problem (especially when evidence seems to show that students’ performance is nonetheless positively affected by the recordings)?

We see two considerations that need to be discussed. First, students will be inclined to attend lectures that provide some element of useful interaction. A lecture based on a one-way delivery of information would be completely captured by a recording and students would have no incentive to attend. For this reason, the use of technological innovation (some of which we shall discuss in this chapter) that allows instructors to better interact with students would prove to be an excellent ally to the instructor who values lecture attendance and interaction. Second, if the students almost exclusively learning from recordings are able to perform at least as well as those students who attend the lectures, this may imply that module assessment may need some re-thinking. In particular, assessment should be tailored in a way to favour critical thinking, discussion and communication skills. In other words, if students knew that they will be assessed on their critical understanding of the subject and lectures provided a platform for critical discussion and interaction, then students would be incentivised to attend lectures and recordings would be a very useful supplement, but not a substitute, to classroom teaching.

Instructors should also try to overcome the fear that their performance may be negatively affected by the awareness that their words and teaching are being recorded. Indeed, even if institutional lecture recording were not in place, nowadays students possess portable technology to record lectures. It is a fact that our teaching is already being recorded, even without our knowledge or consent. It would be, then, advisable if instructors embraced the fact and used the recordings as an opportunity to improve their delivery.

A final note on lecture recording. There may be some legal considerations that should be taken into account, especially when students present during lectures.[6] We advise instructors to seek advice from their institution's eLearning support.