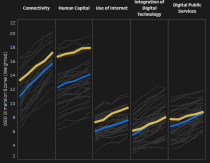 The options for displaying and sharing data online have evolved. Even if you are not a programmer, you are not now limited to the chart options built into spreadsheet software: a new generation of online services support data visualisations that are:

The rapid expansion of choices for data visualisation makes it ever more important to choose visualisations that are appropriate to the data, clear to the users and helpful to whatever story is being told.

These are usually hosted services so, against the above advantages, consider:

This is a short guide through some services that are free to use and relevant to visualising economic data. We assume you already have your data in a spreadsheet. For advice on finding economic data in the first place, see our separate guide.

Some outstanding examples of economic data visualisations are listed in our links database.

This service takes data via copy-and-paste, spreadsheet upload, or Google Sheets link; gives a menu of options for charts or maps to display and tweak; then lets you embed the result in your own web page. It is meant for quick publication of professional-looking interactive charts and maps. The free option has a number of limits, including a maximum of 10,000 views per month.

The free account has most of the features of the paid service. On a free account, everything you make is publicly visible and hosted on the Flourish server, whereas with the paid version allows private projects and allows downloading of the charts to another server.

Flourish has a dedicated template for making "bar chart races"- a currently popular animation for comparing the progress of countries or cities over a long time period.

This service accepts a data set, gives you some choices about how it is displayed, then gives you the visualisation as an image file to download, either as a PNG or as a SVG (vector graphics) file. The idea is that you can make further improvements in image editing software: for example, SVG files can be opened in Illustrator. RAWGraphs is not a hosting service in the sense of the other services here.

Infogram is intended for infographics that include interactive charts, visible as a web page or embeddable within other web pages. It takes input data via copy-and-paste, spreadsheet upload, Google Sheets, Dropbox, or Onedrive. The free version offers 37 different chart types, with restrictions on image downloading, on number of projects and number of map types (13 in the free version against more than 500 for the paid version).

This is (the free version of) an app that lets you author an infographic made of interactive charts. It can connect to Google Sheets for data, as well as to spreadsheets and data tables that are in PDFs. The resulting tableaux can be embedded in web pages or downloaded as PowerPoint or PDF.

I created a slightly silly data set (countries, their fertility rates according to UNESCO, and the numbers of stars on their flags) with Wikidata and exported it as a .csv. Countries are identified in this data table with both English name and three-letter ISO code (e.g. USA, GBR, FRA). Two numeric fields and a country field give us a few options for visualisation. I then tried the different services, looking to generate an online chart as quickly as possible.

Datawrapper auto-detected the ISO country codes in my data, and automatically selected the numeric data to display. To get the link to the finished chart I had to enter my email address, but the whole process was still very quick. Use the mouse wheel or the + button to zoom in on the map, and you'll see the country names that I've supplied. I was given a choice of colour schemes, and a choice as to where the key would appear.

To create a map in Flourish, I had to take an existing map template, with its own embedded data, merge my data, then delete the data from the template that I didn't want to use. The whole process involved some unnecessary steps, and I couldn't find how to alter the key. There were lots of options for colour schemes, but whereas Datawrapper shows the colours, Flourish describes them in words, so I had to test them out in turn. I had hoped to have the title appear above the map and the legend underneath, but it was not obvious how to achieve this. Interaction is used nicely in the finished result, with the country name and fertility value appearing when you mouse over the country.

Although Rawgraphs advertises that you can enter data by dragging-and-dropping a file onto their page, neither this nor uploading the file worked, despite multiple attempts. In the end, I opened my CSV in Excel and copied-and-pasted from that into Rawgraphs.

It noticed the two numeric columns and suggested a scatter graph: maps were not on offer. Selecting which fields would be the x and y axis was a simple matter of drag-and-drop, but no labels appeared on the axes.

I didn't have to enter an email address to get the final output: just copy and paste the vector graphics code.

Rawgraphs is specialised for time series data and categorical data that can be expressed as a tree, so arguably this was not a good test of what they offer.

Rather than starting by uploading my data set, I had to start by choosing a template. Reconciling my country data to the list of countries in the template was a hassle, because rather than using country codes it went by names, and some of the names are out of date or idiosyncratic. For a start, it did not recognise "United States of America" because it was expecting "United States". I gave up trying to find what it calls North Korea/ the Democratic People's Republic of Korea.

The appeal of the "infographic" approach is that a lot of different chart and text panels can be included in one page. The Infogram graphical interface is sophisticated though it didn't seem ideal for editing charts. The country map recognised the existence of numerical data, but expressed it in a colour scheme going from black to black: all countries had the same colour until tweaked! Legends don't automatically appear for numeric data, and once I got a legend to appear it was upside-down and with a title in the middle of the page.

This tool could make a very impressive set of interactive charts, but it would take a long time tweaking and editing to achieve it. The resulting infographic for my data set makes nice use of mouse-over effects (mouse over the legend of the map, for example) but also introduces some animation effects that don't seem to add anything (the way the map lowers into place or the bar chart expands).

Unlike the others that are online services, this involved installing software on my laptop. From the wide variety of controls and buttons available, it was clear that Tableau is very powerful, but requires much more of an investment of time to get comfortable with. Tableau has a system of "measures" and "dimensions" and it was confusing to know how my numerical fields would be interpreted.

The resulting map has some nice interactive features and can be downloaded in various formats as a static image. This was a very inefficient way to make one map, but the attraction of Tableau is the prospect of making workbooks that combine multiple visualisations.