The National Student Survey (NSS) is an annual survey conducted by the National Union of Students (NUS) aimed at final-year undergraduates in the UK. With approximate response rates of 70%, the survey constitutes some of the most important data available for gauging student satisfaction. As part of our wider research into the employability of economics graduates, we look at the past 12 years of NSS data up to 2019. To help gain perspective, we compare the results for economics to similar subjects (mathematics, politics, finance and business studies) and also break the results down by university type (‘Russell Group’, ‘Post-1992’ and ‘Other’).

In 2017 the NSS altered their questionnaire, taking the number of questions from 22 to 27. Some changes are very minor; for these questions, we simply treat the 2017-19 data as a continuation of the data collected in previous years (see appendix of full PDF report for details of question changes).

Q1: The staff are good at explaining things 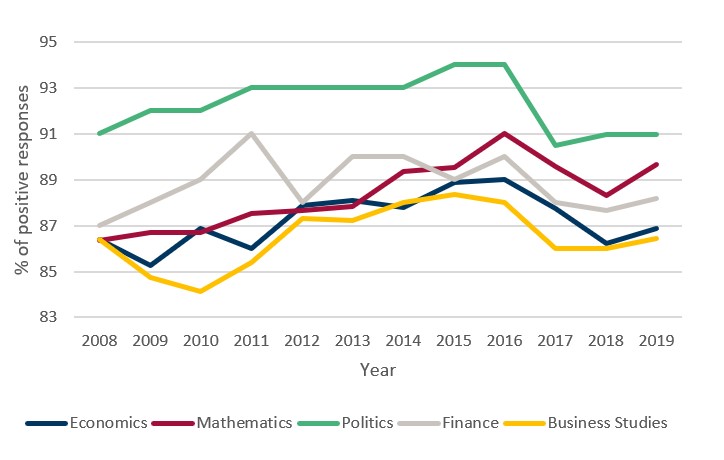 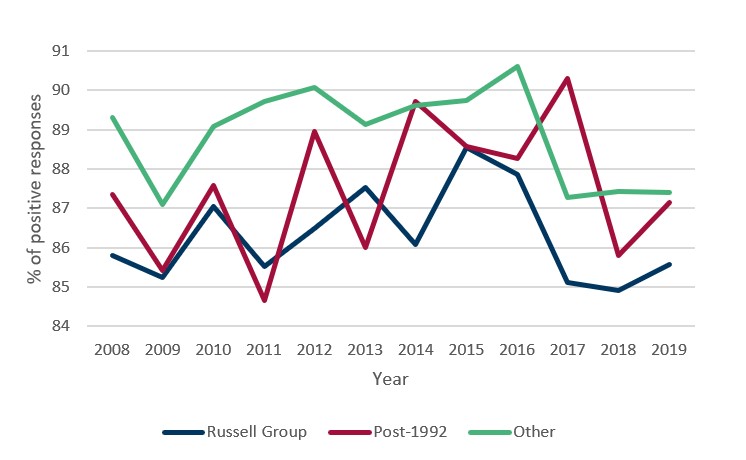 Q2: Staff have made the subject interesting 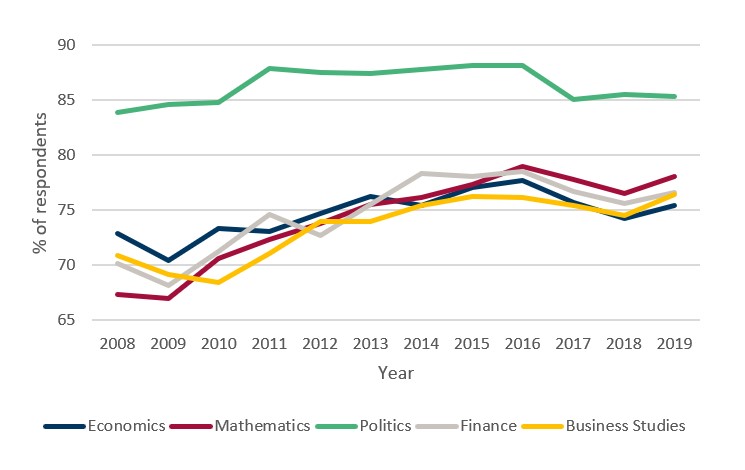 In the 2019 survey, economics receives the lowest proportion of positive responses at 75.5%. Economics, mathematics, finance and business studies all scores within 2.7 percentage points (pp) of one another. All subjects improve their score for this question over the twelve-year horizon. 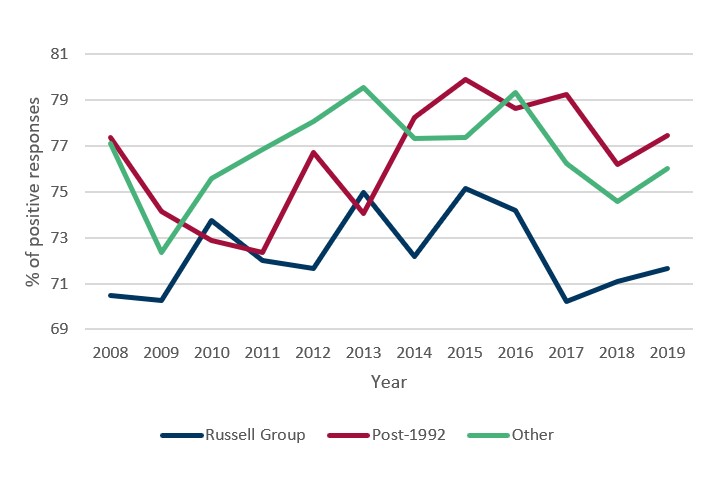 All three types of university see an improvement in scores between 2018 and 2019. ‘Russell Group’ universities have the lowest score for 10 of the 12 years.

Q3: The course is intellectually stimulating 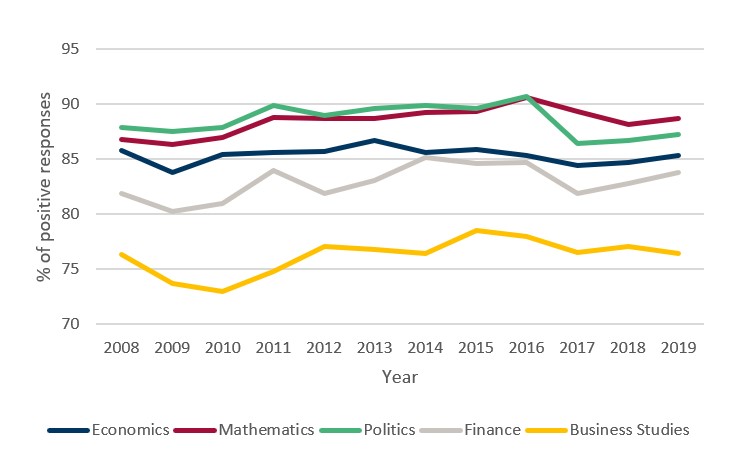 For each individual subject, responses to this question have remained quite stable across the studied horizon. The largest difference in scores between 2008 and 2018 is for mathematics, accounting for only a 1.9pp change over the decade. Economics has the lowest range of any of the subjects, with a maximum of 86.7% in 2013 and a minimum of 83.8% in 2009 (therefore the range is just 2.9pp over the entire horizon).

Q4: My course has challenged me to achieve my best work 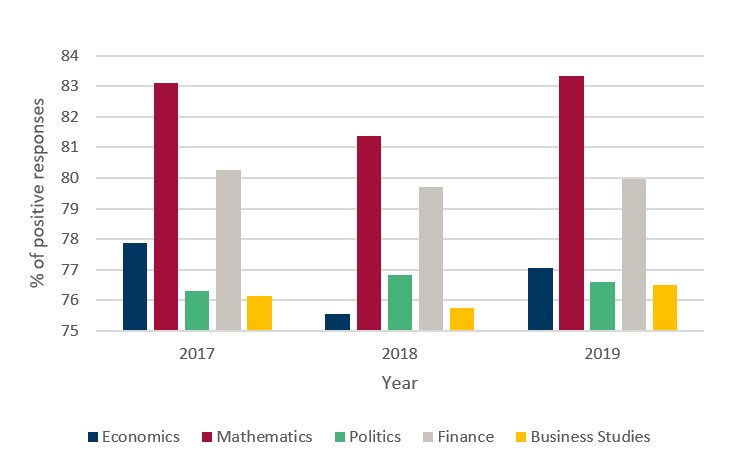 Despite ranking third in 2017 with a score of 77.9%, economics falls into the lowest ranking position in the 2018 survey, attaining a score of 75.6%, but manages to regain the third rank in 2019 with a score of 77.0%. Mathematics attains the highest score for all three years. 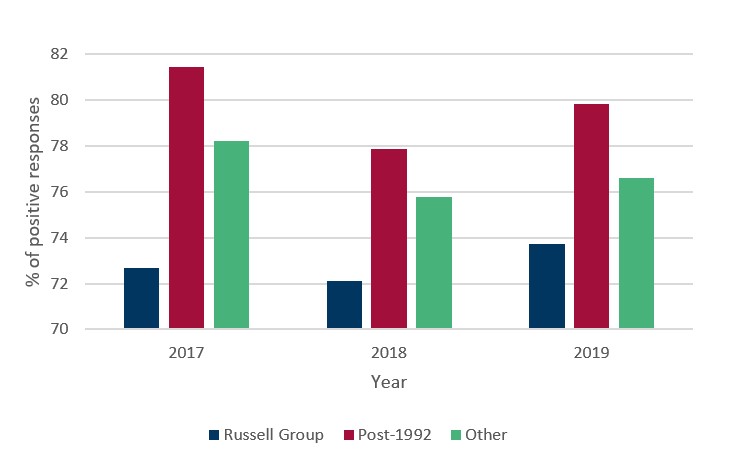 All three types of university see a drop in positive response rates between 2017 and 2018 and a subsequent increase in 2019. Further, the rankings remain unchanged in all three years, with ‘Post-1992’ institutions gaining the highest score and the ‘Russell Group’ universities gaining the lowest.

Q5: My course has provided me with opportunities to explore ideas and concepts in depth 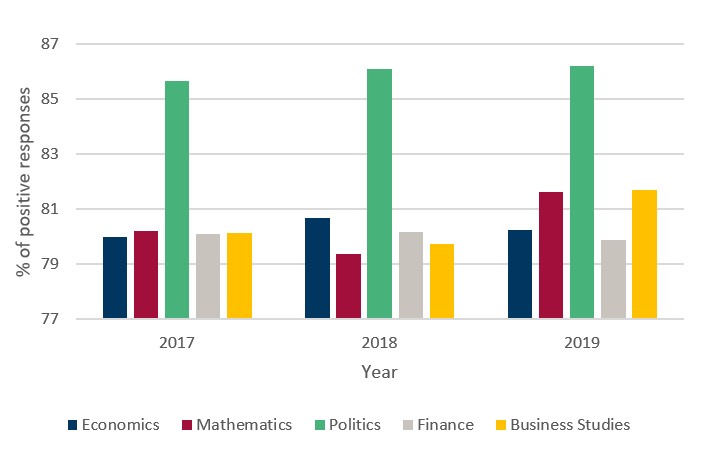 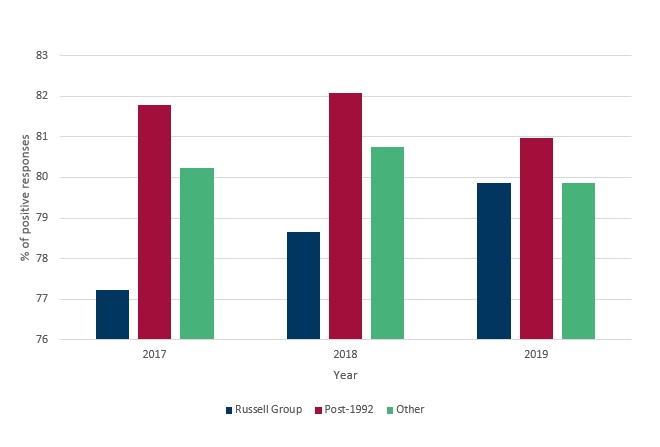 Q6: My course has provided me with opportunities to bring information and ideas together from different topics 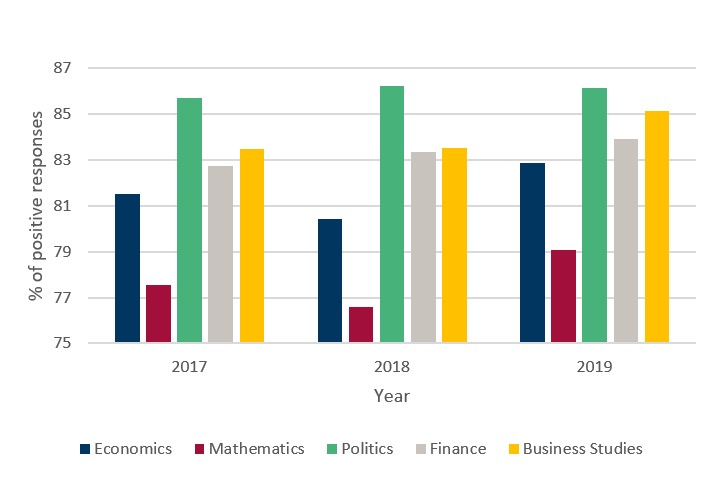 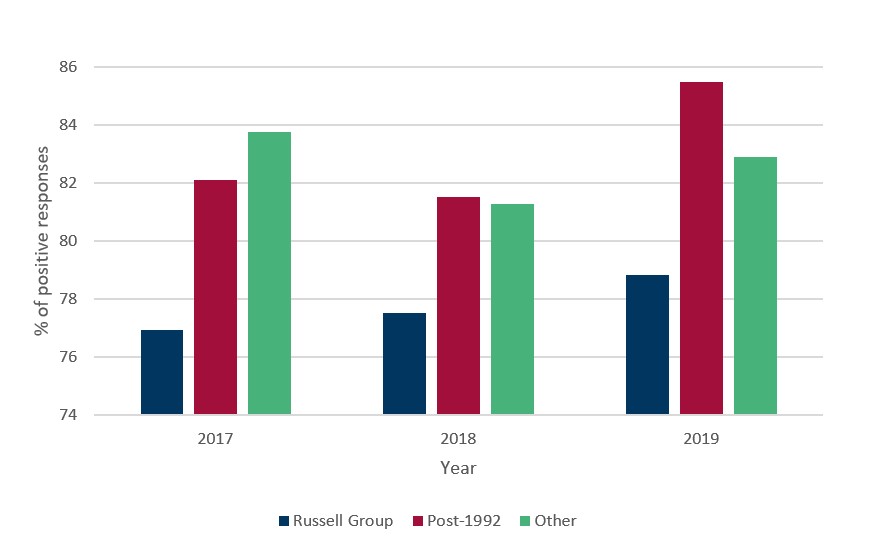 ‘Post-1992’ universities obtain the highest positive response rates for 2018 and 2019, while ‘Russell Group’ universities receive the lowest scores in all three years.

Q7: My course has provided me with opportunities to apply what I have learnt< 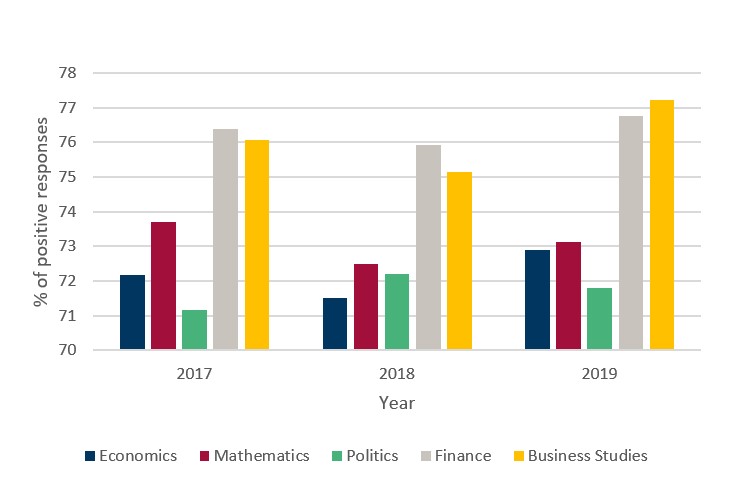 Relative to the other questions in the new ‘Learning opportunities’ section, positive response rates are low. Finance and business studies give students the greatest degree of opportunity to apply what they have learnt, with scores of 76.8% and 77.2% in 2019 respectively. For economics, this score is just 72.9%.

This is at odds with the preliminary results found in both the Employer Survey and ‘Employability in Economics Degrees’ survey conducted by the Economics Network in 2019, where application is consistently rated by staff and employers alike as one of the most important skills for an economics graduate to develop. Many academics also say students get the chance to develop this skill very regularly, and often through summatively assessed activities.

Q8: The criteria used in marking have been made clear in advance 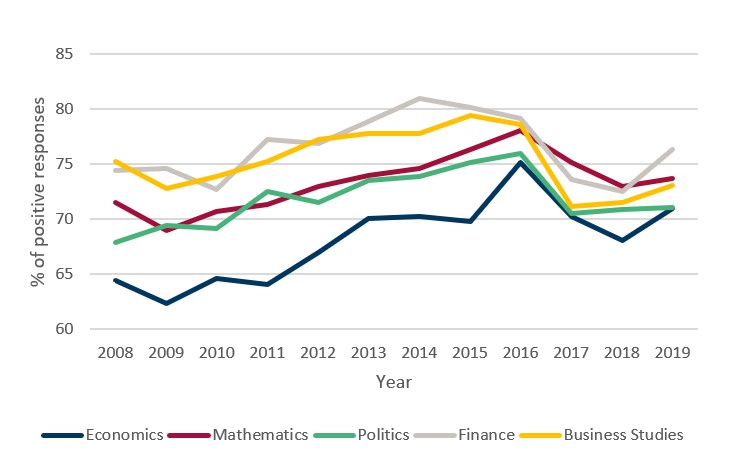 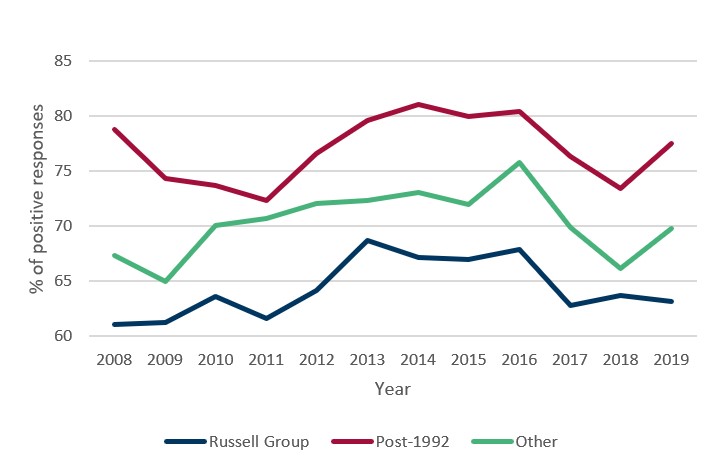 Across the entire horizon, the rankings remain constant with ‘Post-1992’ universities receiving the highest positive response rate, followed by ‘Other’ and then ‘Russell Group’ universities.

Q9: Assessment arrangements and marking have been fair 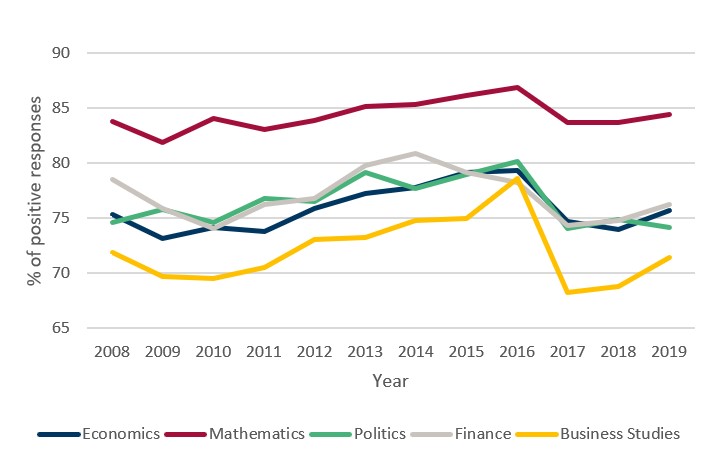 All subjects see a rise in score between 2018 and 2019 for the fairness of assessment criteria except for politics. For economics, the increase is 1.7pp from 74.0% to 75.7%. Economics, politics and finance all score very similarly across the whole horizon. 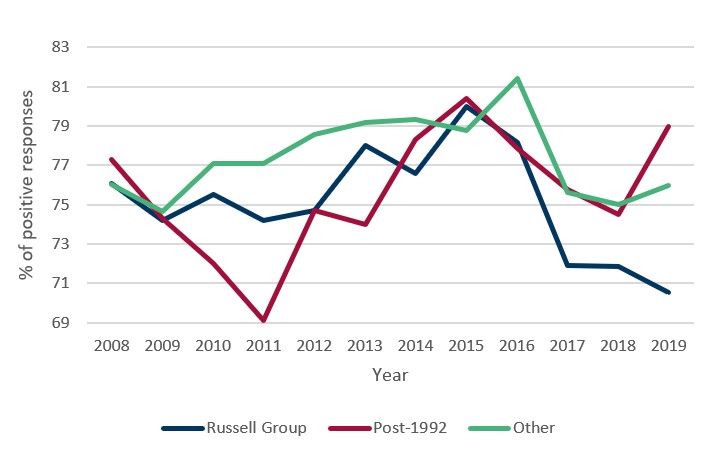 All three categories of university see a sharp fall in positive response rates between 2016 and 2018. However, both ‘Post-1992’ and ‘Other’  universities improve in 2019,  while ‘Russell Group’ falls further behind.

Q10: Feedback on my work has been timely 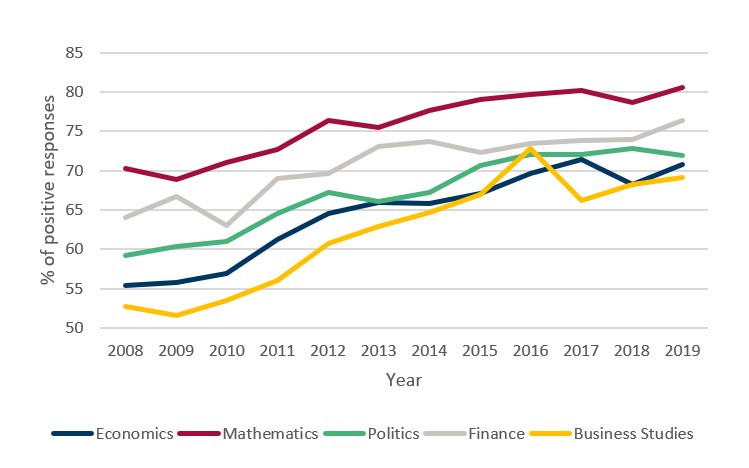 Q12: I have been able to contact staff when I need to 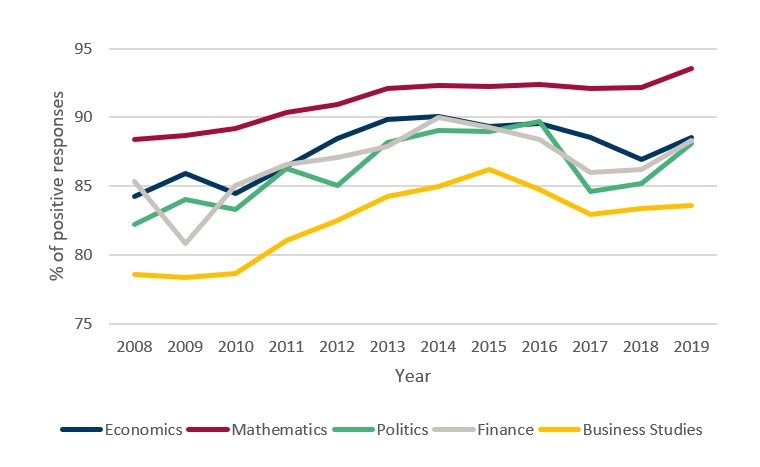 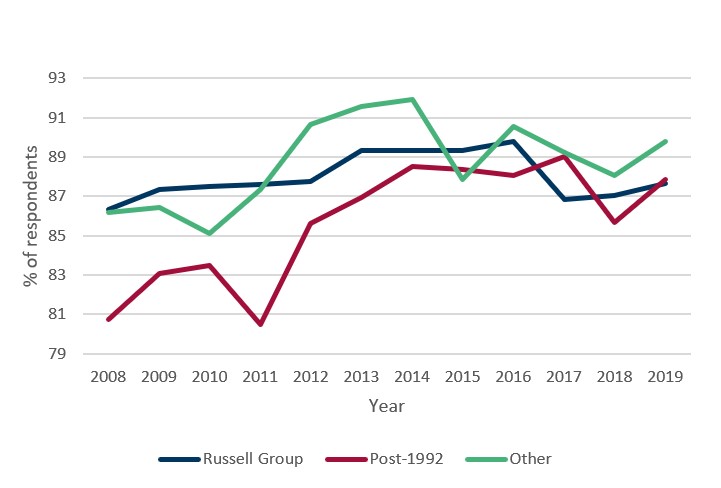 Results are similar across universities, with staff availability improving for all three types of university in 2019. These high response rates are in line with the ‘Employability in Economics Degrees’ survey which suggests widespread availability of one-to-one academic support from personal tutors.

Q13: I have received sufficient guidance in relation to my course 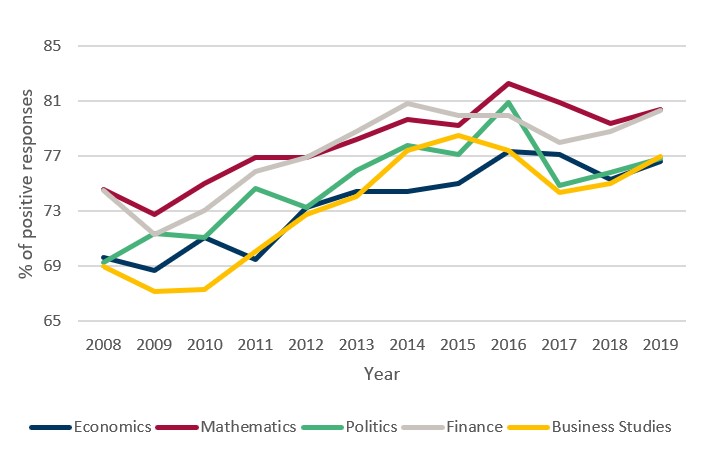 From the graph it appears that the subjects informally trend in two groups; the first high-ranking group comprising of mathematics and finance, and the second low-ranking group comprising of economics, politics and business studies. Within these two groups, relative rankings change frequently. Only finance scores higher in 2019 than in 2016. For economics, this is a decrease from 77.3% to 76.6%. Mathematics attains the 2019 maximum of 80.4%, whilst economics attains the minimum of 76.6%. 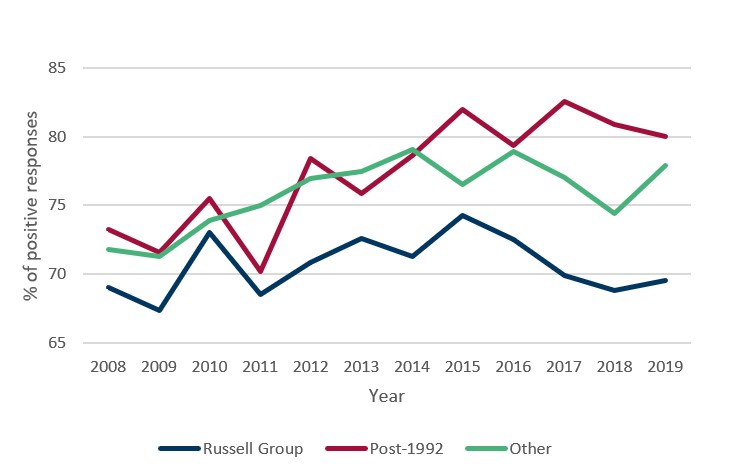 Q14: Good advice was available when I needed to make study choices on my course 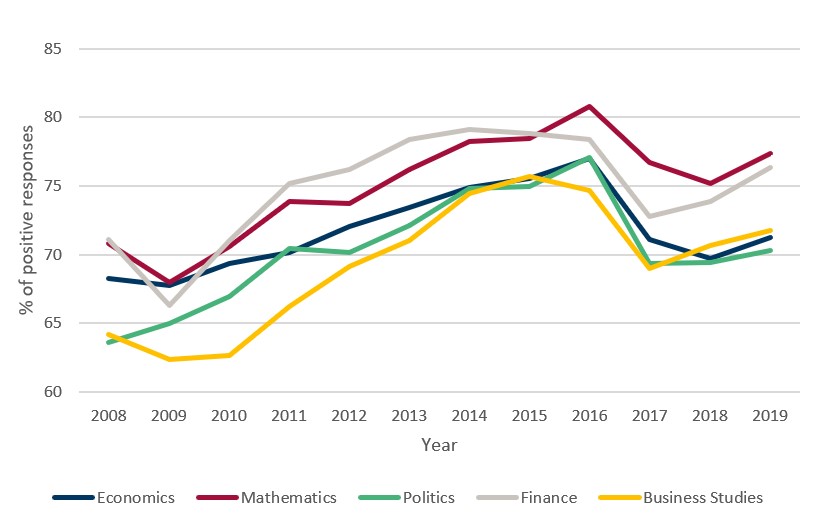 The general pattern of results for this question is similar to the previous question. Again, mathematics and finance see the highest ratings, and business studies scores the lowest rating in the highest number of years. All subjects again see a decline between 2016 and 2018 before rising again in 2019. For economics, this increase is from 69.8% to 71.2%.

Q27: Overall I am satisfied with the quality of my course 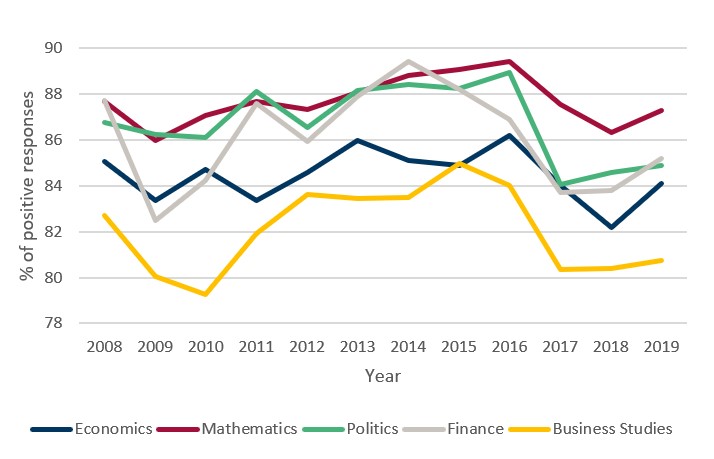 All subjects improve upon their 2018 rating in the most recent survey for overall satisfaction. Rising from 82.2% to 84.1%, economics sees the largest increase. Mathematics scores highest with an overall satisfaction rate of 87.3%, and business studies scores the lowest with a 2019 score of 80.7%. 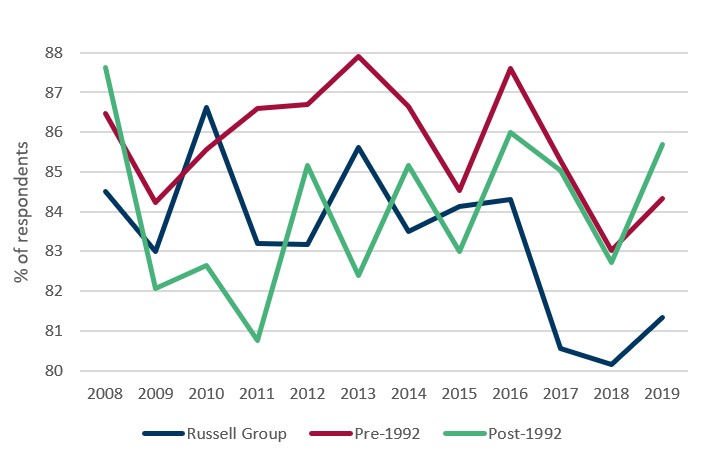 Despite overall satisfaction decreasing since 2016 across institutions, it remains above 80% for all types of university in 2018 and rises across the board in the 2019 survey.