In recent decades many countries have experienced a significant expansion of higher education. This impressive growth has been accompanied by an increasing number of students who are perceived to be unprepared for university and college level work. In light of this situation, a large proportion of higher education institutions have been forced to set up remedial courses in literacy and numeracy for first-year students. Nevertheless, whilst in the US there is a growing debate about the effectiveness of these courses, this issue is much less questioned in the UK.  In an attempt to address this deficiency, in this project I look at the effect of remediation in a large School of a post-1992 UK university. A regression discontinuity (RD) design is used in order to address the issue of non-random selection into remedial education.

My sample comprises three consecutive cohorts of first-year students in the academic years 2007-2008, 2008-2009 and 2009-2010. All students enrolling for the first time are required to take an on-line multiple-choice diagnostic test in math. While students whose score on this screening math test is below a given cut-off value are automatically enrolled on a remedial math course, those who scored equal or above this cut-off are exempted from it. There are no exceptions to this rule. The idea of the RD design is to compare the average outcome of students whose result is just above the minimum score requirement with the average outcome of their peers who have scored just below the cut-off. Given that these two groups of students are basically thought to have the same observed (and unobserved) academic ability, the former group represents a good proxy of what would have happened to students if they had not attended remedial courses.

The effectiveness of the math remedial course is measured by comparing the performance of remedial and non-remedial students in a math-based course, which all first-year students are required to take. I consider two different indicators of student performance on the compulsory first-year math-based course: 1) a binary variable that takes the value 1 if the student has successfully completed the course, and zero otherwise; 2) the overall score (out of 100) received by the student on the course. 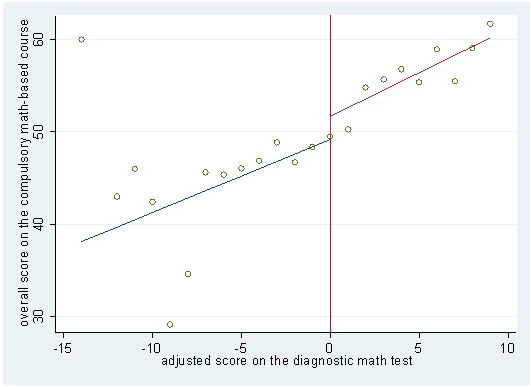 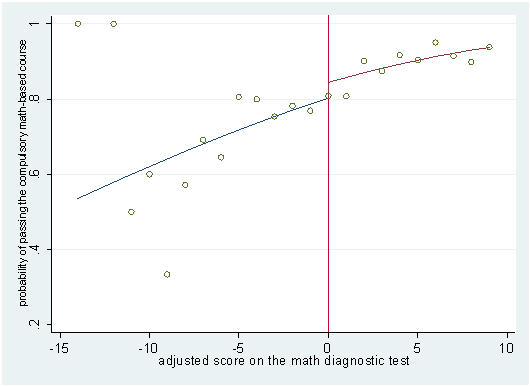 Additionally, my empirical results show that the effectiveness of remediation does not depend on its timing. Taking the math remedial course at the same time or prior to the compulsory math-based course does not change the conclusion mentioned above.

My findings are consistent with those of a recent study by Lagerlöf and Seltzer (2009), which is based on data from a pre-1992 UK university. Taken together, these results may call for a review of the remediation policy offered at university level in the UK.