In the academic year 2006/07, a number of games/experiments were introduced onto an introductory microeconomics module at Coventry University, as part of a Learning and Teaching Development project funded by the Economics Network. The games and experiments were well received by the students and positive feedback was obtained from an on-line survey. Many of the comments stressed how participation in the games had led to a better understanding of key theories/concepts.

The only real drawback with the project was the impact it had on the expectations of the students. Having found the games/experiments so useful in the introductory microeconomics module, they wanted to see them introduced onto the intermediate/second level module!!!

Introducing games onto a second year module did create more of a challenge. Whereas there are numerous teaching experiments and associated resources available for introductory level courses, there are far fewer available for higher level courses. A further rationale for another project was a perceived gap in the literature. Published research on the effectiveness of classroom experiments has tended to focus on their impact on introductory level modules. This is reflected in the papers by Dickie (2006), Emerson and Taylor (2004) and Ball, Eckel and Rojas (2005). All these papers reported a statistically significant impact of participating in games/experiments on various measures of student learning. The only reference I could find on higher level modules came from Brauer and Delemeester (2001). They interpret research finding by Fras (1980) as:

"Perhaps validating the observation that games at intermediate level would not be worth the opportunity cost of the time".

Given the contrast between this statement and the findings from previous research on introductory modules, it seemed a worthwhile exercise to investigate the impact of games on an intermediate level module in more detail. Having obtained funding, the aim of this second Learning and Teaching Project was not only to find and adapt classroom experiments suitable for intermediate microeconomics, but also to assess the relative effectiveness of different types of game. Balkenborg and Kaplan (2009) split teaching experiments into three categories - Hand-run, Computerised and Homework. In the first project only in-class hand run games were used. Another aim of this project was to introduce and assess the effectiveness of both computerised and homework experiments. Holt's Veconlab and Exeter University's FEELE websites would be used to run the computerised experiments. The FEELE website was developed as part an FDTL 5 project - Bringing Economic Experiments into the Classroom.

After a review of the relevant literature the following five experiments were introduced onto the module.

Deal Or No Deal

Unlike many of the teaching experiments, this one is not a simplified version of a research experiment. Instead, it is based on a daytime television game show with which many students will be familiar. A number of on-line versions of this game are available on the internet. However, for teaching purposes I have found the following NBC version the most useful: Deal Or No Deal Game Show (NB: broken link as of 2019. Another version of the game is here - web editor)

One student in class is chosen to actually play the game. The others are given a handout to record what their own decisions would have been in the final few rounds of the game. In particular, they are asked how much higher/lower the bankers offer would have had to have been in order for them to just change their minds. The game is very useful for illustrating expected value/utility, the certainty equivalent and risk premium.

This was an individual choice experiment with no requirement for any interaction between the participants. For this reason it was used as a homework experiment. A link was set up on the WebCT module page to the relevant section of the Veconlab website. The students then had to make a sequence of lottery choices. One potential drawback of using homework experiments is the potential for a low participation rate. In this example 39 out of 55 students completed the experiment. The results were downloaded from the website and analysed in class to see if the choices were consistent with expected utility theory. The experiment was useful for illustrating the 'common ratio' version of the Allais paradox and the reflection effect. (i.e. Where choices that demonstrate a preference for risk aversion when outcomes are framed as gains change into those that demonstrate risk loving preferences when outcomes are framed as losses.)

This game closely follows the format suggested by Holt and Sherman (1989). Students are split into groups and assigned the role of either a buyer (8 groups) or a seller (6 groups). The sellers can sell up to two units of a product. They must decide what price to charge and what quality of the good to produce. They can choose between three different quality grades and are given cost information on each of these different grades. Once they have made their price/grade decision, this information is collected and posted on a whiteboard. The buyers then have to decide which of the offers they want to accept (if any at all). They are provided with valuations of the three different grades and unknown to the buyers or sellers, these valuations are the same for each buyer. The buying is done sequentially, so a key logistical issue when running this game is how to determine the order in which the different buyers make their purchases. i.e. which buyer will go first, which buyer second and so on.

A method I have used which is simple and effective is to use playing cards. Simply have eight playing cards with the numbers 1-8. The buyers choose a card and this determines their place in the buying queue. The game is repeated over a number of rounds. In the initial rounds of the game the buyer has full information about the product. In the later rounds they only know the price when they buy the product. The grade is not discovered until after the purchase is made. The game is very useful for illustrating adverse selection. In the rounds with asymmetric information the sellers very quickly settle on choosing grade 1. Given the valuation and cost data, the allocatively efficient outcome is for all trades to be grade at 2. Further extensions to this game have been suggested by Wolf and Myerscough (2007).

Given the logistical issues of running multiple oligopoly markets it was decided to use computerised versions of Cournot and Bertrand games available on the Veconlab and FEELE websites. Both these websites are easy to use and provide very clear instructions. One potential drawback of using computerised games is that the students can become easily distracted by the temptation of checking their e-mail or Facebook accounts. This certainly was an issue the first time the experiment was run. However, both FEELE and Veconlab can now be run in Kiosk mode. This effectively locks the computers and prevents the students from using them for anything but the experiment. My recent experience of running the games in Kiosk mode was very successful and seemed very effective at overcoming the distraction problem. Results from the Cournot game played using Veconlab in Kiosk mode are shown below 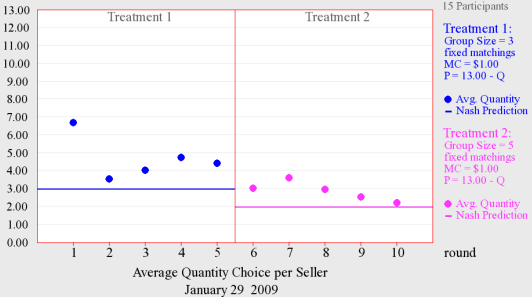 As the rounds progress the results begin to approach the Nash equilibrium. In the Bertrand game, prices quickly fall until they are equal to marginal cost. For more details and results from the Betrand game see Balkenborg and Kaplan (2009).

This game was adapted from a format suggested by Holt and Anderson (1999). The students act as voters and playing cards are used to assign their preferences for building a hospital, building a school, building both a school and hospital or building neither. A pairwise majority voting system is used where the winning option from one vote is matched against another alternative. The game clearly illustrates the Condorcet paradox, and gives the students the chance to determine the sequence of voting in order to achieve the outcome they most favour. It also gives them the opportunity to vote strategically in order to affect the choices in the later stages of voting.

Staff from the Economics Network were very supportive and helped in the construction of a simple questionnaire using the Bristol on-line survey. Below are some examples of student comments from the free-text questions.

"Sometimes I find certain theories or concepts very difficult to understand properly when being taught in a normal lecture. However the games present me with a much greater sense of understanding and relating them to current issues or giving examples makes it easier for me to learn and remember"

"There could be a few more games in the classroom. They are really good at helping me grasp the concepts that are taught in class"

"The games are good, but I think we spend too long playing them because the actual analysis and interpretation of the results is what I learn from the most"

The last comment demonstrates the importance of discussing the results and integrating them into further lecture/seminar work.

Overall the subjective evidence from the impact of the games on the intermediate module appear as positive as on the introductory module. Seventy nine percent of the respondents agree with the statement that 'per hour in the classroom I learned more about economics from games/experiments than I learned from traditional lectures'. When asked about the particular games, the student responses indicated that they found the 'Deal No Deal' game the most effective. Ninety percent found this game either useful or very useful in helping them to understand economic theory. The least effective was the on-line lottery choice experiment, although sixty-six percent of respondents still found this game useful or very useful.

Obviously the evidence from this project is not conclusive. It is based on a relatively small number of subjective respondents to a questionnaire. One can question how accurately students are able to judge their own learning and understanding. Reporting on their research into the impact of one classroom experiment, Gremmen and Potters (1997) concluded that: