Panopto is screen capture software that allows users to record what is happening on their computer screens. The intention of this report is to assess how it has been integrated with traditional class-based teaching, as well as suggesting some ideas for using it to further improve the teaching scheme.

I will first introduce how it works, then I will explain how I used it and how useful it may be in supporting student learning. Finally, I will suggest some potential applications.

Screen actions are recorded by a camera and the available video then can be played remotely. As a consequence, students are permitted to learn on demand. The Panopto recorder lets you decide how and what you can record. A presenter may wish to record alone or with a videographer using a separate computer. It can be used to record a PowerPoint presentation as well as for giving feedback to students’ essays or homeworks.

The Panopto Recorder is very small and easy to install on computers with Windows Vista or Windows XP. It is also necessary to have a considerable amount of free drive space to capture your video recording.

The first step is to open the application on your computer and enter your server address, login and password; a recording page will appear on your screen. Secondly, you have to select the devices through which you want to record. At the same time the Recorder will ask you to create a folder in which you add your videos and a new session. Finally, the Recorder will allow you to select recording devices and start recording. These devices include cameras, audio inputs, screen capture, PowerPoint and remote devices. 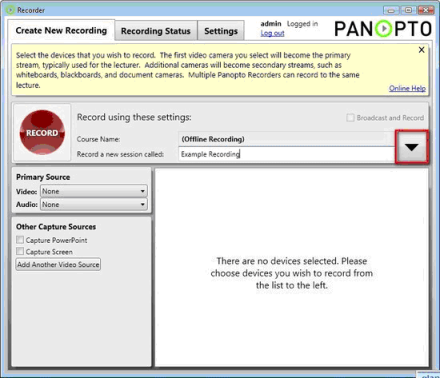 Panopto allows you to stop during the recording if, for example, there are some parts of your presentation that you do not want to include in the final video that students will see. At the end of your session, click on the “End Recording” button and the “Manage Recordings” tabs will appear. If your recorder is set to automatically upload recordings you will be able to watch the progress as your recording is uploaded. If not, you have to follow the instructions to start or resume your recording.

Teaching Game Theory with Panopto: How I used it and how useful it may be in supporting student learning

This academic year I have introduced this electronic resource in my Advanced Microeconomics course for 3rd year economic students to teach a specific topic, "Game Theory: the Chain Store Paradox". Though the course was in advanced microeconomics the subject in itself required special attention and concentration by students because it introduced notions such as Bayesian Games, Sequential Equilibrium, and Reputational Models which were new to the students. Also the specific application though in a simplified version (2-period model instead of the general n-period model) is highly intricate and students need to follow all the steps to understand the final conclusion.

This topic has usually not been introduced for students encountering game theory for the first time, because it was considered too difficult for them to follow step by step. However, last year it was introduced in the same course in a standard lecture towards the end of the planned lectures, assuming that students had acquired the sufficient theoretical tools to cope with it. Nevertheless, the result has not been satisfying because many students had difficulties to understand the steps of the presentation and we decided not to test students on it. The choice was then between cancelling it from the syllabus or spending more sessions to better introduce the topic. But increasing the number of lectures was impossible without deleting other important topics and at the same time we wanted to introduce it because of its usefulness.

Reputation models [introduced by Kreps and Wilson (1982a, b)] are widely used in international and domestic politics (Alt and Calvert), international economics (Cole and Kehoe 1996) and industrial organisation (Kreps and Wilson (1982b), also it allows to introduce an application of the notion of sequential equilibria [introduced by Kreps and Wilson (1982a)] which is an easier way to approach this notion for beginners. Unfortunately standard textbooks either do not introduce the topic (Gibbons, Myerson, Rasmusen) or present an advanced version of it (Tirole). Thus I decided (and I was encouraged by the module leader Professor John Sessions) to use the recently introduced resource of Panopto.

This would have allowed students to take as much time as they needed to follow step by step the presentation and re-watch it carefully more than once. I have used Panopto to record my video lecture accompanied by slides where all the analytical passages were presented and commented in detail. In order to create a normal class-room atmosphere a selected number of students have been invited to actively take part in it and pose questions on single points that initially seemed not clear.

The feedback has been positive because students directly involved in it have shown interest to the experiment and they have not spent time focusing on many details but rather they tried to concentrate on the general structure of the argument, being aware of the fact that they could have downloaded it later and better understood the missing details. Also some students who have watched the recording have been able to understand the passages and to answer specific questions I asked on the topic.

The recorded lecture has lasted 1h30m and those students who have been able to answer to my specific questions have spent between 2h and 2h30m approximately to watch it, stopping the video and re-watching the critical points. Overall we achieved the main objectives which were the introduction of this important and difficult subject for students facing game theory for the first time. I am aware this was just an experiment and much can be done in the future to improve upon it and to further exploit the resources provided by Panopto.

Remarks and future prospects: how it might be used

Panopto in my case has proven itself to be extremely useful to achieve my objective in a very simple way. However, its potential goes much further. Indeed, just by clicking on one button you can start recording, then clicking on it again you can stop, thus you can even record your lecture in your office or at home. You just need a microphone and a webcam. In the long run, it will cost you nothing. If all your lectures have been already recorded, then they are ready for you to use for as many years to come. If in a certain day, you cannot make a lecture, you will not have to worry about re-scheduling it, as you can simply podcast a previously recorded lecture or you can use live stream to podcast your lecture from anywhere. Also, you need not worry about access, because public access can be controlled and be subject to authorisation, and you can control who gets access to your seminars/lectures. You can edit your recording. So, if there is a part that you think should be cut, you can do that before podcasting your lecture.

Finally, the aspect of Panopto which I have not yet exploited, but with the highest potential, is its live stream facility. Students can watch it live and interact with the teacher, asking questions and all that will be recorded. This may be also particularly useful in some emergency situations such as a sudden drop in attendance due to flu or in the event of University closure owing to snow (as it happened last February at the University of Bath and many other places) or something else.

Panopto can be downloaded at: http://www.panopto.com/

Other content in:
Online and distance learning
Contributor profiles:
Giancarlo Ianulardo
Supported by